Gentle Joe goes by the name Job J. Musa by birth. The Abuja born singer saysNobody Greater portrays the explanatory greatness of our God being above every other gods and powers. It also reflects the perfection of God in our lives when we look up to him alone as the only great King

Evang. Adewale Abe known as W. Divino is a gospel artist based in Italy. He’s also a multi instrumentalist, producer, motivational speaker, evangelist and a seasoned music director. W. Divino relocated to Europe in the 90s.

A graduate of Marketing from the University of Greenwich London, who has a passion for writing songs and speaking about the love of God to mankind. He is the CEO of Amony records and his album titled WORTHY was released in May 2015.

From the stables of DJERNESTY’S STREET GOSPEL MIXTAPE 11 (THE GREAT COMMISSION) (THE ALBUM) Comes this International Mash-up Single featuring YOYO of Nigeria as she tags along with ENZO all the way from Zimbabwe to bring you this tune titled HALLELUJAH (the universal Language) produced by the Nigerian based SOULBROTHER ENTERTAINMENT BOSS DONSAM and together we bringing down the glory of God!!!….Enjoy!.

Ebiere one of Nigeria’s foremost female vocalists and gospel music ministers just released a brand new single titled ‘Today Is Your Day’. Having released two singles ‘Bless the Lord’ and ‘Holy Spirit’ in the first few months of 2015, this is her third single to be released in preparation for her upcoming album which is due for release this year.

“Today Is Your Day” takes you on fresh direction with a new sound like you haven’t heard before from Ebiere and will get you dancing and praising God. It’s a song for the moment. Its irresistible and a simple song for everyone.

Ebiere Says “Today! I hear the bursting sound of an abundance of rain, it’s the rain of God’s blessings and its loaded with healing, deliverance, favor, restoration, wealth, success, glory, beauty, excellence, Increase, grace; it’s pouring down on you now, will you receive it? It’s all yours. receive it by faith. The chains are breaking. Today is your day!!”

Texas, USA — From the stables of Sept’ 18 Records, Gospel singer and song writer , Motara, who has found her calling in leading God’s people into His presence through Praise and Worship has finally dropped the video of one of her recent singles titled “Ekene” featuring Chibueze. “Ekene” means praise. It’s a popular word used in the Eastern part of Nigeria to offer praise to God.

Produced by Sean Keyz for Sept’ 18 Records, “Ekene” is one song that will definitely get you praising God; declaring His might and Greatness.

She’s not just passionate about music, but she is a worshipper whose goal, is to constantly please God and see His Kingdom come again and again in the place of worship.

A new tune mixed and produced by EddyKayBeatz; World, this is Son Of A Baker by Nek, a member of Christhood group. Kindly download and enjoy!!

Buchi, the music minister and missionary, just released a brand new single titled ‘IT’S STILL LEGAL’ to celebrate his birthday today the 24th of June, 2015. Buchi’s birthday is taking a low-key this year because of the importance of the message in the song, and so Buchi has chosen to release it NOW, instead of his traditional 3 years intervals between albums or new releases.

This is a song to the church, for everyone who has things to do for God, the time is now!  It’s the clarion call of watchmen: Like the “Children of Issachar, Men who had understanding of the times Who knew what Israel ought to do” (1 chronicles 12:32). So RISE UP WHILE IT’S STILL LEGAL to talk about Jesus publicly, before the doors are shut completely. 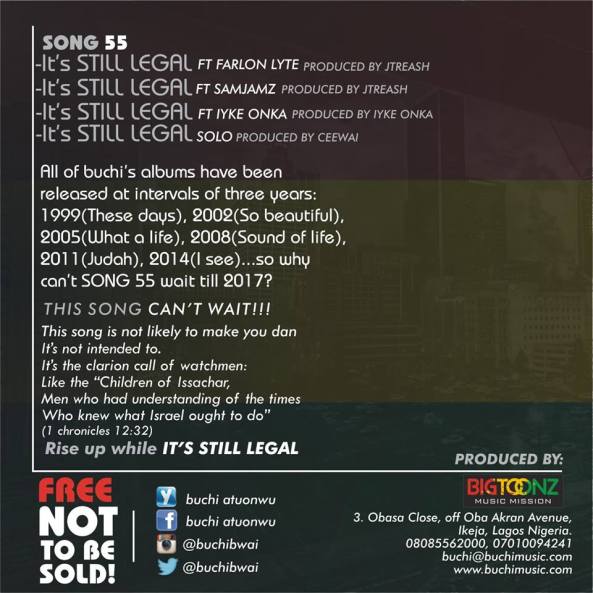 Buchi says “Before I knew that I would ever sing, I always knew that i had a role to play and be involved in a song that would herald the coming of Christ. This is it. I will be eternally grateful if you can as my birthday gift, help, support, share, tweet, post and distribute through your various networks this song, so that this God given message can reach everyone. I Thank You”

Follow Me was basically written and recorded under the influence of the Holy Spirit, telling the world and the Church the necessity of following Christ and understanding the benefits; letting people realize the urgency of God’s kingdom being at hand and renewing their minds with god’s Word (Jesus Christ) and stay deaf to the world and blind to the ordinary.

​Ada makes history again! What started off as another day in the studio turned out to be a milestone for FreeNation Inc. and Ada’s music career as she presents the remix of the epitomic “Bobe Me”.

“Bobo Me”, which is part of the singles on Ada’s Double CD sophomore album, was released in 2012 and was complemented with visuals. The song garnered close to 3000 downloads in its first hours of released and went on to become one of Ada’s most popular releases of all times.

Ada performed the remix at a private concert earlier in June and had Victor Ike join her on stage. The song caught on instantly with wide acceptance by the audience and more so was Victor Ike’s chants of reference towards the end of the song which became the highlight.

Commenting on the chant, Ada said;

“Victor Ike’s chant on “Bobe Me (remix)” happens to be names of men of God who have sown the greatest asset we have in our lives – the word of God – into us. We are better product of the ministry because of those names and for this we celebrate them. You can also celebrate yours as you sing along.”

The remix was produced by Kelly Lyon who also produced the original version.

Radicals for Jesus Christ. An enduring voice in the Gospel Music Industry, with an Album “So High” and several singles released; making radio Hits all across the country. Have record works with Spokesman, Tolu Adesina of MTN Project Fame, SizzlePro, GID, Beejay rhymes Samsong.

In a post made to their Facebook page, R4JC hinted at another new work on the horizon to be released this year, titled Song ” iwo ni “, featuring Nigeria’s ‘Churchboy’… the sensational Samsong which should be “ready soon enough,” according to their Blog post.

This announcement came the same day that the group unexpectedly released one of its latest work “For That Matter.