The Convergence of Christian Creatives in Abuja and it environs tagged  Kingdom Music & Arts Summit, 2022

Over the years many have complained of lack adequate interaction around the Christian  creative industry. This has had great negative effect on our ability to influence our various spheres.

The urgent need to gather in the first of its kind, the kingdom music and art summit is birthed to bridge the gap. The summit is targeted at all creatives ranging from music to comedy, poetry, fashion and all that is.

Speaking about the summit, Marvel Joks says, we all want more and the only way to do more is by coming together. Understanding our differences and building synergy. The power of greatness is embedded in our togetherness.

The event is scheduled to hold as below:

There will be breakout sessions and speakers for the conference are well experienced in their various areas of callings.

With its rising views on YouTube since its release on Friday, Snatcha & Nikki have created a much needed platform to discuss and deal with Relationship & Family Issues within the Christian Community & beyond.

More than Music, It’s all about LOVE, LIFE, RELATIONSHIPS, BLENDED FAMILIES, MARRIAGE, FATHERHOOD, SEX, STEP- PARENTING, RAISING CHILDREN RIGHT and everything in between!

They kick off the podcast with Episode 1: Nikki’s Story – Dealing with Divorce
Starting first, Co-Host, @NikkiLaoye shares her personal story about dealing with divorce, the backlash & how God’s Love pulled her through.

She never lost her joy and she wants to sprinkle some of that on you today.

Watch & Listen in every week as they share their personal truths & inspire you with their opinions & advice on important topics in a fun-filled atmosphere while dealing with the elephants in the room.

We are thrilled to announce the planned release of a fresh sound from UK based SongWriter and Prophetic Psalmist, Isabella Melodies in January 2022. Omeriwo (He has prevailed) will be the first single to be unveiled from Isabella’s soon-to-be-released 10th album titled “Melodies From The Secret Place” and is simply a declaration of the victory we have in Jesus Christ.

Revelations 5:5 “Behold, the Lion of the tribe of Judah, the Root of David, has prevailed…”

Get ready to be blessed by this one.

On the 26th of December from 10:00am⁣⁣⁣⁣⁣⁣⁣⁣⁣⁣⁣ at the Police College Ground, G.R.A. Ikeja, Lagos, we shall raise our voices in grateful praise to The King of kings (Isaiah 24:14 NIV).

⁣⁣⁣⁣⁣⁣⁣⁣⁣⁣⁣⁣⁣⁣⁣Bring your friends and loved ones and come praise God like never before.⁣⁣⁣⁣⁣⁣⁣⁣⁣⁣⁣⁣⁣⁣⁣ It’s going to be a spirit-filled event you’ll never forget.

All Covid-19 protocols will be duly observed.

No face mask, no entry. 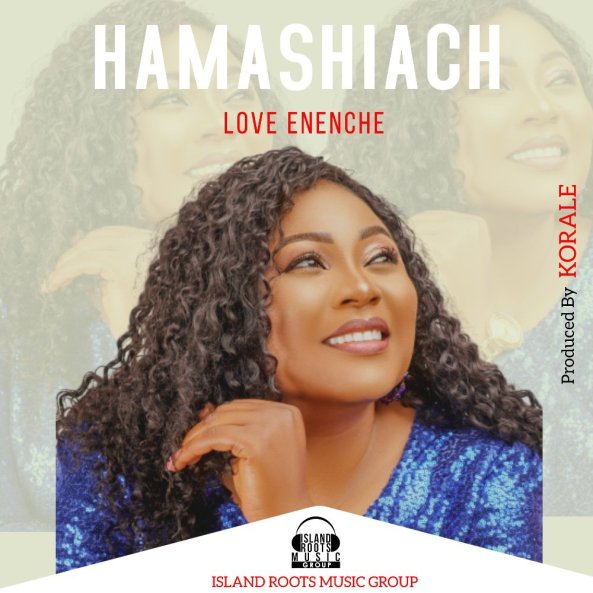 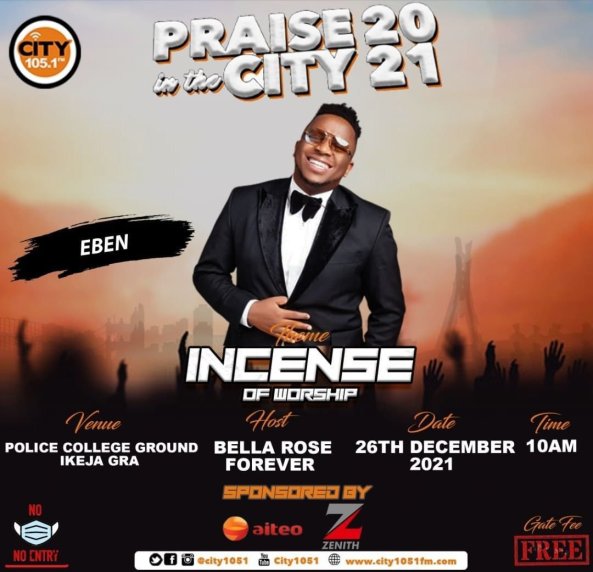 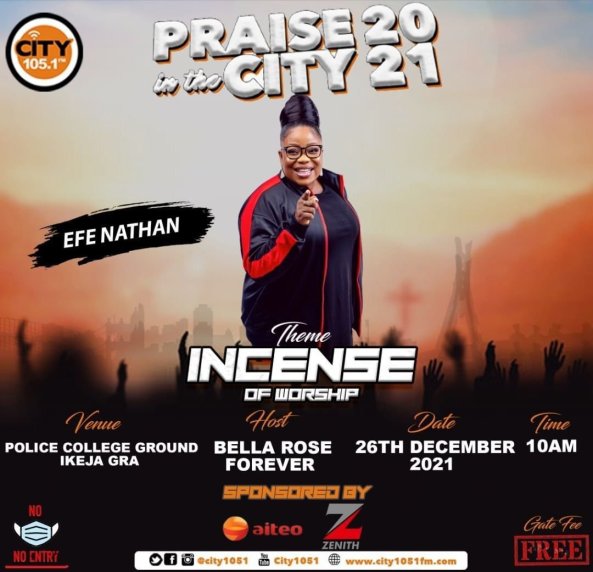 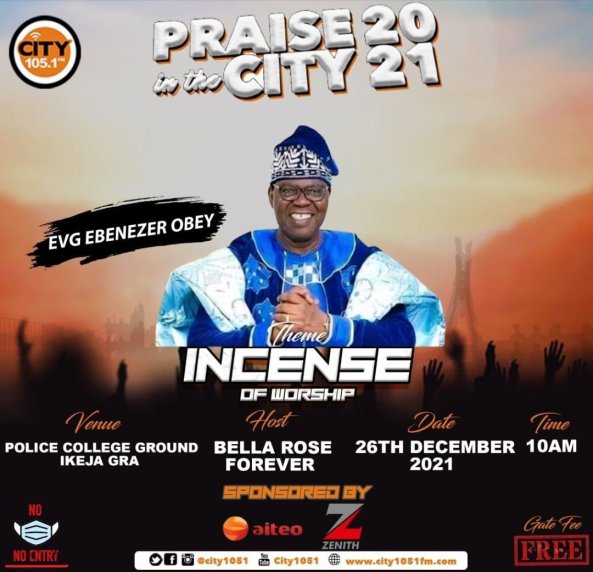 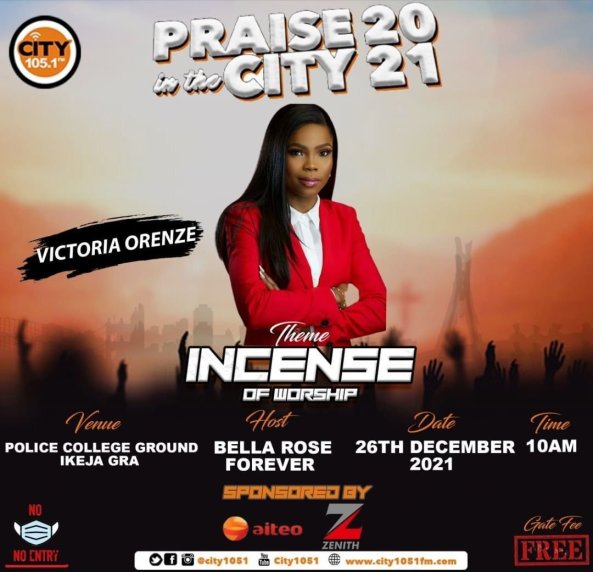 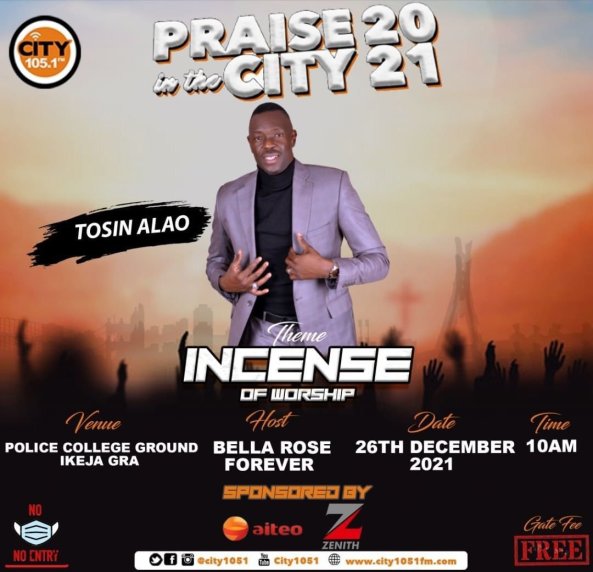 In recent times there has been a rising number of Christian events which have been organized to give Christians an outlet to go hangout and have Godly fun. For Christians looking to hangout with fellow believers especially in the city of Ibadan, Tephilah Ministries International is organizing an End of Year Praise/Carol Night tagged “Stone of Help.”

The event which is hosted by the founder of Tephilah Ministries International, Pastor John Olumayowa and Moji Zion promises to be one for the books. With a plethora of Christian artists and performers such as Taiwo Fafore, Ibironke, Ogunse Drama, Wande Zion, Femi James, Seun Mighty amongst others Stone of Help is sure to be a blast.

Tephilah Ministries International who are the organizers of the special monthly program WATO which stands for Words And Tongues Only has the vision to preach the Gospel to every soul and win them for Christ and they are leaving no stones unturned to achieve that vision.

Stone of Help will hold on the 17th of December at the Hall of Fortune, NUT Building, Ayankoya street, Oke Ado, Ibadan, Oyo State. and the time is 8:00pm.

Zion World Christian Centre‘s annual convention tagged MOADA 2021 is here again and this edition has the theme ATMOSPHERE OF MIRACLES.
The yearly convention is an amazing time for the gathering of believers to experience the awesomeness of God, His Word, wonder working power and might.
This convention is championed by Pastor Jude Osobase the general overseer and lead pastor at Zion World Christian Centre.
Through the power of the Word and God’s anointing, the lame shall be walking, sight shall be restored to the blind, deaf ears will be opened, terminal disease will be terminated, hope restored to the hopeless and lot more.
This power packed convention will be a three days program which has been scheduled to hold as follows;

ABOUT THE HOST
The host of MOADA 2021 Pastor Jude Osobase is an anointed and a prolific preacher of God’s word based in Lagos Nigeria.
He is the general overseer and lead Pastor of Zion World Christian Center with headquarters at Lagos State, Nigeria having a teeming number of members.
He was born and brought up in Edo State, Nigeria to Catholic parents. He studied Geophysics and graduated from the prestigious Ambrose Alli university (AAU) Ekpoma, where he championed a campus fellowship known as Zion World Campus Fellowship (ZWCF).
After the mandatory one year service in Akwa Ibom, he relocated to Lagos and worked with First City Monument Bank (FCMB) and Keystone Bank the defunct Platinum Habib Bank (PHB).
It was during his time at the Platinum Habib Bank that he got the instruction from God to take His healing to the ends of the earth and adhering to that instruction birthed the Zion World Ministry.
His love for God and God’s kingdom is unparalleled as he started loving God from an early age. At 11 years of age, he got born again and accepted the gift of salvation and has has consciously be living &leading a Christian life.
Pastor Jude Osobase is happily married to his heartthrob Pastor Precious Osobase and their marriage is blessed with three amazing kids.
Since the establishment of the ministry, Pastor Jude Osobase has hosted a number of live conventions & other events and the 1,000 Holy Ghost Fire Shout (a prayer encounter), which holds online by 7AM every Saturday (Nigerian time). 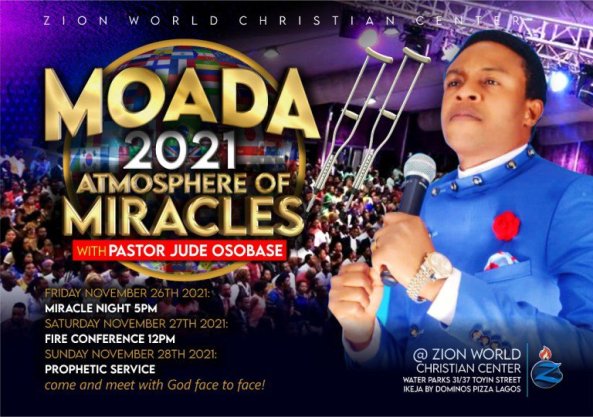 At a strategic media partnership meeting with Neita Uwaibi, a corporate communication officer for cool FM, wazobia FM and Nigeria info FM, Project Director for GosGem concepts, Hillary Vincent explained that this event is to remind people of the true essence of Christmas beyond all of the festivities that comes with the season.

It is also a good time for friends and families to unite in gratitude to God for a fruitful year.

Gosgem Concepts promises an unforgettable Family Christmas Concert with Sinach and Friends which is scheduled to hold in Lagos on Sunday, 12th December 2021 at the prestigious Monarch Event Centre Lekki, by 3pm.

For tickets and reservations CLICK HERE or visit the outlets stated below.

The palms shopping mall.
All film house IMAX Cinemas
All Genesis restaurants and cinema outlets.
It Promises to be a Christmas concert to remember!!!

The Worshipper is a music concert and entertainment event hosted by one of Nigeria’s ace gospel music artist and producer, Progress Effiong, with the aim of glorifying God and reaching out to impact communities and persons with humanitarian services.

This event was first hosted in 2013 in the city of Uyo and it witnessed the unprecedented turnout of hundreds of people who later expressed how impactful the event was; they also gave very positive reviews about it. The event was followed by a charity visit by the team to a community in Ikot Abasi LGA area where the humanitarian gesture was extended to the people, mostly in clothing materials.

A subsequent edition of the event, THE WORSHIPPER 2, was held in 2014 and after that it took a break due to certain challenges beyond control.

Seven years later THE WORSHIPPER 3 is here; bigger, better and UNSTOPPABLE. As part of the events heralding this massive come back and in line with the vision of this brand, a singing competition has been set up to empower persons with singing talent who don’t have the platform, resources and network to showcase their gift to the world. The winner of this singing competition will be awarded a grand prize of a one year record deal with Pally Pee worth N1,000,000 which covers the full production of an EP of five songs, a standard video for one song and promotion on DSTV, radio and TV stations, and online platforms. There are other prizes also for 1st and 2nd runner up.

To headline at THE WORSHIPPER 3 is a very outstanding and notable ace gospel artist, the host, Progress Effiong, who has saturated the airwaves in some Nigerian cities with hit songs like Ama, Amanam, Miracle Worker (featuring Eben), Ibagha, Amen, My Prayer (featuring Khaya Sibanyoni of Joyous celebration, Kama, etc. Also billed to perform at the event are some home-based A-list and other artists and comedians in and around the city of Uyo including the Owo’Do crooner ~ Bobby Friga, Emem Baseda, the legendary Apostle Ezekiel Umoh, General Odeh, Mc Governor a.k.a Akpan Mma Udo Obot etc.
The Worship 3 Live With Progress Effiong
THE WORSHIPPER 3 promises to be life-changing, joy-giving, exciting, impactful, unforgettable and inevitably irresistible.
Details:-

Foretaste Concert is coming to you both in-person and online on Saturday 13th of November, 2021. This is the eight edition of the annual concert and it promises to be a glorious time of worship, word and divine impartation.

The convener of Foretaste Concert, Dupsy Oyeneyin received the vision in 2014, which is to create a conducive atmosphere of worship which encourages attendees to have an experience of intimacy with their Father and Creator. In this atmosphere, a foretaste of what will ultimately be our reality in heaven is created and God’s people will receive Divine Vision, Purpose, Order and Alignment to help them fulfil their mission in life.

This year’s edition themed THE OUTPOURING will hold at FREUDE’s Place in Maryland, Lagos as well as online on YouTube. There will be ministrations in songs by IfeWorships, Asatta Allwell-Brown, Minister Ejen and Dupsy Oyeneyin.

The Spirit of God is set to turn every life around and move them to another level of glory. The tangible presence of the Holy Spirit will be poured out on all flesh until the wilderness becomes a fertile field, and the fertile field becomes a fruitful forest