The session is an unforgettable time of refreshing, comfort and healing by His stripes. Jesus Christ is alive and still doing good. He is still healing all who are oppressed of the devil because He is God. Chris Shalom and the Wordbreed Worship Group use the service session to set the stage for anyone who believes in the healing power of Christ so that such a one can receive his miracle.

The Supremacy of Christ, the potency and possibilities in His name has always been at the core of the message of the Wordbreed Worship Service. This month – Healed by His Stripes – the group intensifies on the message with great anticipation for unusual manifestations.

The Wordbreed Worship Service kicked off in 2017, long before online worship service became a thing. It re-emerged recently, due to the urgency prompted by the 2020 global pandemic. In August, the service recorded a surge in viewership, thereby leading to even more testimonies than the previous edition. The September edition promises to beat the past record still.

Let this worship service fill your homes with the unusual miracles and testimonies, as you join Chris Shalom and the Wordbreed Worship Group for another time of encounter, with an expectation to be healed by His stripes. 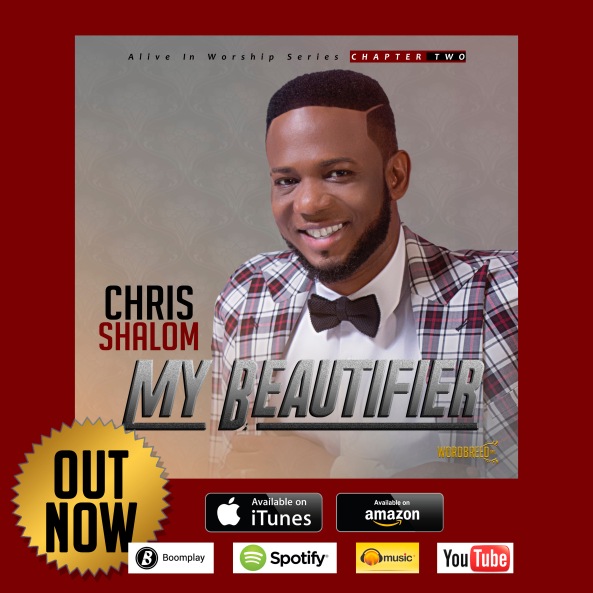 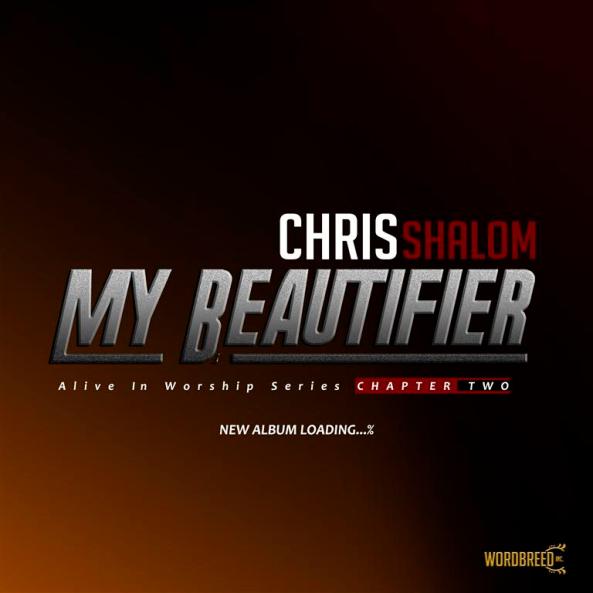 Gospel music minister Chris Shalom is ready for the release of his 6th Studio album titled “My Beautifier”.

After the release of the 5th studio album “You are the Reason”, theGolden Voice, aka Chris Shalom embarked on the “Worship in Every Place” series. From the series, singles such as “My Beautifier”, Dry Bones are Rising” were birthed and has now translated into the 6th studio album.

“My Beautifier” was not just successful in statistics with close to 2 million views on Youtube, but the impact rippled across the world, garnering feedback and testimonies. Little wonder Chris Shalom chose to name the 6th studio album after the track.

The new album will form the body of work that makes up chapter 2 of the “Alive in Worship” series. “You are the Reason” album, which is the chapter 1 was released in 2015. The wave-making album contains singles such as “Power Belongs to You”, “God of Miracles & Wonders”, “Unto the King”, amongst others.

Chris Shalom will reveal more details on the forthcoming 6th studio album in the coming days. Keep your eyes peeled!

The man with the Golden Voice, Chris Shalom has a peculiar gift of interpreting the kairos into powerful life-giving music piece. This is why the new single “Dry Bones Are Rising” is a timely response – a confirmation to a sure word of prophecy.

Coming as the second release of the “Worship in Every Place” series, the song is Contemporary Gospel with a pulsating rhythm. Chris Shalom makes a profound declaration with his simple sing-along melody yet carries in-depth and precise lyrics!

Chris Shalom had hinted after the release of “My Beautifier”, which became critically acclaimed almost immediately, that he will be releasing more singles off the “Worship in Every Place” series.

“Flesh to flesh, bone to bone… dry bones are rising in the name of Jesus” – Chris Shalom

Get the song on MUSIC+ below: 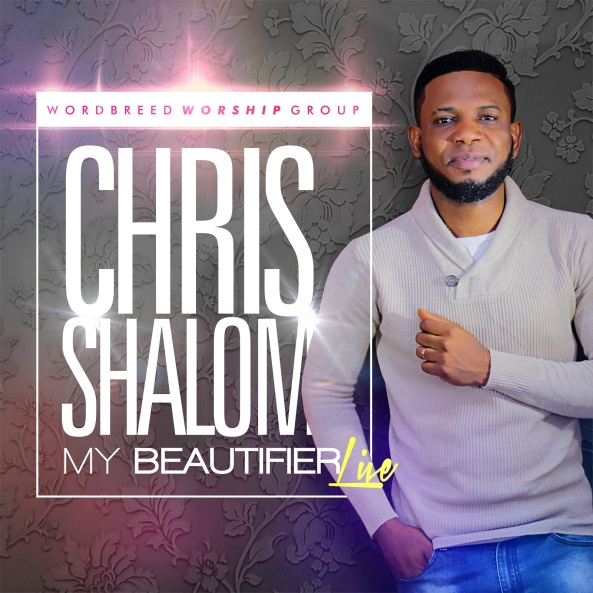 Worship is mostly about beholding the awesomeness of the Supreme One and when we begin to see the undistorted image of God, we can begin to see ourselves the way we are truly held in His eyes. The Golden Voice, Chris Shalom has crafted the perfect worship song that paints the perfect picture of our reflection looking through the eyes of God.

From the ”Worship in Every Place” series, comes the amazing work ‘My Beautifier’ by Chris Shalom. An alluring expression of the Zoe kind of life, which can only be given by the finished work of Jesus. It is the first release from the series and Chris Shalom has hinted that more should be expected in the course of the year.

Quite typical of the Golden Voice, it is a simple sing along worship song but laced with Afrocentric rhythm and an accentuated lead guitar. Also, one cannot undermine the essence of the background vocals.

“For Every Pain and for every shame, Jesus has brought a turn around. He is given you beauty for ashes and clothing you with a garment of praise.” – Chris Shalom

It is HERE!  Are you ready for a glorious manifestation as the man with the Golden Voice, Chris Shalom unwraps another sound of divinity?

Like mount Zion, and the Mount of transfiguration, you can literally feel the manifest presence of God envelope the ambiance as the sounds that make up “Manifest Your Power” by Chris Shalom blares out.

Evoking the spirit of God with melodious chords,  Chris Shalom  uses rich vocals to render supplication,  yet retaining the assurance in the power of God’s presence.

Unexpected but it’s here! In the spirit of the Easter season, Gospel music minister Chris Shalom has released the single “God of Miracle & Wonders”.

The single is off the 5th studio album released in 2015 titled “You are the Reason”. It speaks of the wondrous works of the Almighty and the fact that the one working these miracles and wonders is still alive and doing the same today.

Produced by Mayo, the single is only available for streaming. 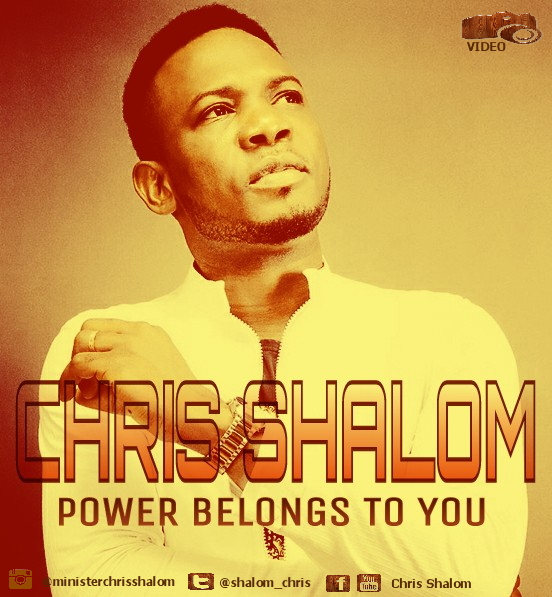 After the successful release of his 5th studio album “You are the Reason”, it is only right that Gospel music minister Chris Shalom aka the Golden Voice crowns the year with the video for “Power Belongs to You” – the single he started the year with.

“Power Belongs to You”, the phenomenal yet simple sing-along worship single ushered in the album “You are the Reason” and has stood out, gradually topping the records of Chris Shalom’s widely accepted single “You are the Reason”. The single has also broken the boundaries of religion and can be heard not only on alters and amongst Christians but also at public places thus garnering more commercial value as well.

The video directed by Marthins Harrison follows a simple plot to tell a compelling story of the power and sovereignty of the Almighty God.Chris Shalom is excited about the release of the video and believes it will take the song to a whole new meaning as people get inspired, motivated, encouraged and blessed all over again.

Gospel music minister Chris Shalom aka the Golden Voice kicked off the year with the release of the single “Power Belongs to You”, a song that ushered in the album, “You are the Reason”. A lot has happened in between and Chris has been keeping us up to speed on his itinerary, therefore one can say it’s been an eventful year for the Gospel music minister, but before Chris Shalom takes an inventory of the year in view, he will be rounding off the eventful year by putting visuals to the single he kicked off the year with.

“Power Belongs to You” was released on the 15th of January, 2015 and true to the prediction,  the single has topped the yardstick already set by the previous hit “You are the Reason” as you can find it on many playlists, mixtapes, and choirs are already making an anthem of it all over the world.

Shot by Marthins Harrison, the video follows a simple plot that tells a compelling story of the power of the Almighty God. Chris Shalom has set a Monday 14th of December release date for the video but for now, let’s whet the appetite with the snippet:

Here is the brand new single from one of Nigeria’s revered gospel music ministers, Chris Shalom. The singer, writer, producer and music minister Chris Shalom has returned with yet another worship song “Unto The King”. The song is a simple, easy-to-sing-along tune and it gives all glory, honor and praise to the King of All who is worthy of it all.
DOWNLOAD