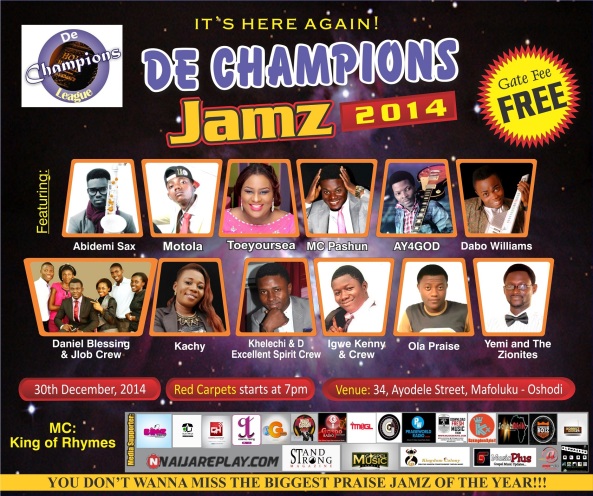 It here again, Dechampions.net present to you one of the biggest gospel jamz of the year, tagged De Champions Jamz 2014 on Tuesday, 30th , 2014 at 7pm. The Jamz will be Held at 34, Ayodele Street, Mafoluku-Oshodi, Lagos state and will be featuring a lot of gospel music and drama minister.

“De Champions Jamz 2014” is one of our visionary ways of gathering people of diverse background, denomination, religion, tribe and race together in an atmosphere of intense praise headlined by seasoned praise Leaders.
The Jamz will be featuring music minister, the likes of Abidemi Sax, Toeyoursea, Ay4God, Dabo Williams, Daniel Blessing and Jlob Crew, Kachy, Motola, Khelechi & D Excellent Spirit Crew, Igwe Kenny and Crew, Ola Praise, Yemi and the Zionites and other drama minister, comedy by the Commander-in-chief of microphone forces, Mc Pashun and others, Mc of the day King of Rhymes aka GT.

You don’t wanna miss the biggest praise Jamz of the 2014, make sure you are there.