The May edition of the Official Nigerian Gospel Music Top 10 Chart, as compiled by The International Association of Christian Media Practitioners [IACMP], is out! Surprisingly Gospel music minister Dunsin Oyekan has retained the number 1 spot with his newly released single “At All Cost.”

Dunsin Oyekan’s music has enjoyed outstanding critical reviews from IACMP that has kept him at the top of the chart at different times. The May edition makes it the 2nd time in a row that Dunsin Oyekan has maintained the number 1 spot. It should be recalled that the critically acclaimed “Fragrance to Fire” stole the spot for the month of April.

Coming in at Number 2 spot and knocking Steve Crown’s “Angels Bow” off that spot is “If God Be For Me” by Nosa. Released on the 3rd of May, it is already approaching a hundred-thousand milestone on Youtube. Sammie Okposo moves up 2 steps to claim the number 3 spot with “Nobody Can.”

The video version of the May edition of the countdown features the delectable OAP BellaRose Okojie, teaming up with Amachree Superstar.

See the complete chart below:

1. Dunsin Oyekan – At All Cost

3. Sammie Okposo – Nobody Can

7. Theophilus Sunday – Only You

9. Victoria Orenze – Rejoice in the Lord

Watch the video version of the countdown with BellaRose Okojie: 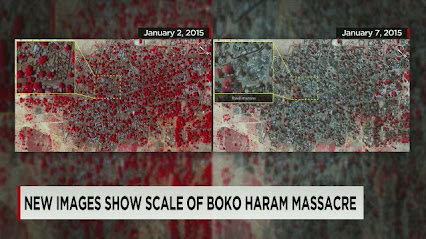 The president of the Nigerian Baptist Convention (NBC) has made an impassioned plea for the world to intervene against the Boko Haram insurgents who have ravaged the north and east of the country.

In an interview for the Baptist World Alliance, Rev Samson Ayokunle expressed “consternation” at the attitude of the international community in the face of the destruction.

“The earnestness with which they intervened in the ISIL attack in Syria and Iraq, or the Taliban problem in Afghanistan … is not shown in the case of Nigeria.”

He accused the world community of devaluing Nigerian lives, saying: “Does it not matter to the rest of the world if Boko Haram continues to kill hundreds of people every week? Are these people less human than those being killed in other place where they have gone to directly intervene? My people are being killed like animals and the whole world is just watching.”

Ayokunle was responding to the latest series of attacks by Boko Haram, including the destruction of Baga in Borno State, thought to have cost as many as 2,000 lives. An estimated 1.5 million people have been displaced as a result of the militant group’s attacks, which included the abduction of more than 250 schoolgirls from Chibok village in April last year.

He accused the group of deliberately targeting Christians, saying: “The main targets in all these attacks are the Christians first and any other person that opposes them. Any town they enter, after killing the Christians there, they go ahead to bring down all the churches there, sparing the mosques. Major Christian cities such as Gwoza and Mubi among others have fallen to them. Christians in cities such as Michika and Baga are also on the run.”

Ayokunle said that the Church was facing “severe persecution”. In one town, Mubi, he said that not a single church was still standing, that Baptist schools had also been closed and that 2,000 Baptists, including the pastors, had fled through Cameroon. He said that while they had now returned to Nigeria, “They have become displaced and are now living in displaced people’s camps scampering for food, without decent accommodation and naked.”

He asked for support for the refugees and for prayer, saying: “Continue to join us in prayer so that the gates of hell might not prevail against the Church of Christ in Nigeria.”

Pastor Michael Osifo recalls being able to play soccer until nightfall as a child in Nigeria. Augusta Ekong remembers sleeping in her boarding school bed, with no fear and no need for security workers.

That Nigeria is gone, they say, replaced with violence, bloodshed and fear.

Thousands of miles from their home countries, in Houston and Dallas â€” which have large Nigerian populations â€” Osifo and Ekong are gathering their communities, seeking to help resolve a crisis in which nearly 300 girls were kidnapped from a school by Islamic militants and more than 100 others were killed in a marketplace in Borno state in northeastern Nigeria.

Osifo, pastor of The Redeemed Christian Church of God gathered his congregants Friday in Sugar Land, Texas, to address the tragedy. Ekong is working with other groups, including a Muslim organization, to hold a rally Sunday in front of Dallas’ City Hall.

“What can we do?” Osifo said ahead of Friday’s service. “We need ideas. How can we take this thing to the next level?”

“We know the Western world has agreed to help us,” Osifo said, referring to U.S. and British assistance in helping to obtain the release of the 276 girls being held by the Boko Haram militants. “But that’s not enough.”

Boko Haram, a Muslim extremist group that aims to impose Islamic law in Nigeria, kidnapped the girls April 15. On Monday, the group attacked a market in Gamboru, and estimates of the death toll range from 100 to 300. On Friday, British security agents arrived in Lagos to assist Americans and Nigerians in the search for the girls.

Osifo grew up in Benin, the capital of Edo state in southern Nigeria. He left about 20 years ago and moved to California before coming to Houston in 2002.

The Nigerian community there has formed churches and opened ethnic grocery stores and restaurants, where they now gather and talk about the crisis.

“It burns my heart because the Nigeria I left many years ago is no more,” Osifo said. “Today we are seeing more of that violence everywhere. People are being killed, homes are being destroyed, churches, schools.”

Ekong, 52, also grew up in southern Nigeria, in the delta town of Uyu in Akwa Ibum state. The strife in the north and the strict Islamic lifestyle that discourages women from getting an education is foreign to her. But like most girls, including those who were kidnapped, she went to a boarding school at the age of 12.

The thought that she could be snatched at night and taken away is frightening, said Ekong, who teaches Nigerian and African culture at schools and museums in Texas.

“Our sisters in the north are suffering, and we want it to stop,” she said.

“It’s very, very hard, very sad, and we just keep those girls lifted up on prayer,” she said.

The ASUU strike has extended a couple of months and the FG and ASUU haven’t been able to reach a compromise. The latest news coming your way on ASUU strike is that the FG is set to open Nigerian Universities with or without ASUU, according to ScanNews Nigeria. President Goodluck Jonathan will on Monday, November 4, meet with the leadership of ASUU at the Presidential Villa.

An official of the Vice President’s office who pleaded anonymity told Scan News that all hands are now on deck to ensure that the Universities resume next week. The President will at next Monday’s meeting present to the ASUU leadership the administration’s last concession for them to call off the prolonged strike. A source at the Presidential Villa noted that if ASUU fails to call off, the Federal Government will then resort to plan B, which will be to compulsorily open the Universities, using the instrumentality of the governing councils and the school managements.

Already, most of the governing councils of the Universities have started meeting to work out modalities for the compulsory re-opening of the Universities should ASUU fail to honour the personal request of President Jonathan. It was gathered that security report available to the Presidency may have necessitated this line of action to salvage the Universities system from the direction it is facing at present.

As Nigeria marked their 53rd Independence, the group know as The Avalanche which is the official choir of The Commonwealth Of Zion Assembly dropped their redefined version of the Nigerian National Anthem. I like the way they came in, as they redefined the anthem in a beautiful way. . . What more can i say, than you need to give it a try.

Nigeria-based Islamist group Ansaru said it had killed seven foreign hostages it seized on 7 February from a construction company in Nigeria. SITE Monitoring Service said the group issued a statement in Arabic and English on an affiliate of the Sinam al-Islam network. The statement was accompanied by screen shots of a video purporting to show the dead hostages, SITE said. One screenshot showed a man with gun standing above several prone figures lying on the ground. Ansaru, which has kidnapped other foreigners in the past, had blasted into the compound using explosives and abducted a Briton…

In celebration of the Nollywood’s 20th anniversary, President Goodluck Ebele Jonathan has donated a grant of N3 billion to the industry to be supervised by the Minister of Finance, Ngozi Okonjo iweala and Minister of culture, tourism and national orientation, Edem Duke.

This announcement was made at the State Banquet hall last night where the President dined with the Nollywood industry. The grant titled “Project Nollywood” will be commissioned on the first week of April.
In his speech, the President acknowledged the pivotal roles Nollywood has played in promoting the brand image of Nigeria both within and outside the continent. “There are  three endeavours that unite Nigerians: sports, music and movies.”

Also supporting the industry, the Akwa-Ibom state governor, Godswill Akpabio donated the sum of 50 million naira to the industry as the President’s award for creativity.

One of the key issues facing the movie industry as highlighted by Amaka Igwe at the event was the issue of piracy and infrastructure which the President promised to look into.
Performances at the event include Tuface, Timi Dakolo, Dakore Egbuson…