After the successful release of #YouFellForMe on Valentine day (A thought provoking song that gives you a glimpse of Christ’s Love for Us), Via Her Instagram and facebook accounts, The #GoodieGoodie Crooner has signaled us of a new song titled #Nailed. This song is scheduled to be released this Easter.
See What she has to say about it.

Wow. I don’t feel like I’m the one releasing this song. I anticipate #nailed like everyone else.
This song came some long time ago… Before #goodiegoodie. I just couldn’t record even after using the hashtag for a while on social media….
It was slated for my 2nd song to be released… It still didn’t work, #I_mconfident took over.
Tonight I’m excited, not just because its coming out soon, but because I understand why this song wasn’t recorded and released last year. God has taken me through series of eye opening word sessions on what happened at calvary. Its the gospel… Its the story of Love and death fused together as God wills, its about how forgiver I am.
This song is about the generation whose sin isn’t counted against them.
It is for those who are the righteousness of God in Christ.
This song is about the new covenant… Its for those who have God’s signet.. The holyspirit.
I’m excited people!!! Words can’t say it all.

Anticipate #nailed.
I am the #voiceofJesustonations

Same OG is dropping a FULL BODY OF MUSIC. It is her Debut project as she has initially dropped singles which has earned lot of good comments via tangible dissemination.
Being the first body of work, Same OG who is a young independent female artist shows some versatility, passion and ultimately wants to make a huge impact hence putting up a campaign structure to make this work well known.

The aim of this campaign is to take Same OG and her songs on this project to the END OF THE WORLD. #Amen.

So you are enjoined to be on the lookout as Same OG would be right in your face.

Here’s a video preview for a tip of what to expect: 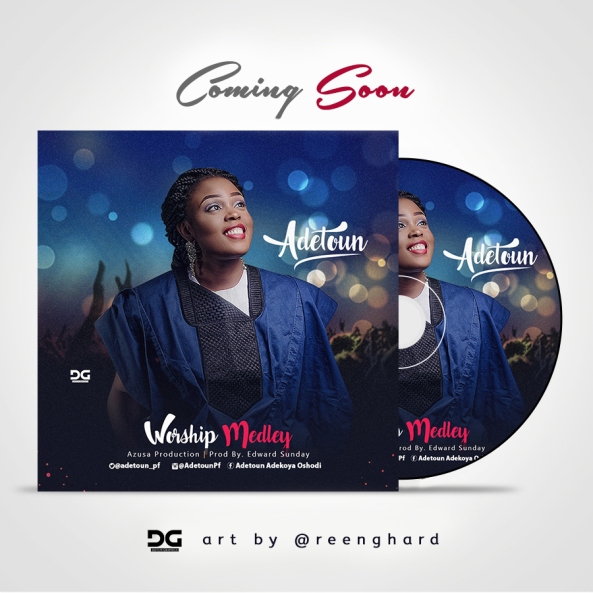 After a brief hiatus, second runner up at Mtn Project fame Season 5 & award winning music artiste, Adetoun Adekoya Oshodi popularly known as “Waka baby” returns with a personal invitation for all to go on a musical journey to their secret place as she’s set to release a new sound of worship.

Over the course of her music career, punctuated with much critical and commercial acclaim, Adetoun has solidified herself as a creative musical force in contemporary praise & worship.

Adetoun’s continued contributions to gospel music go well beyond her own recording career as a singer/songwriter, worship leader and extends to music consultant and Visionary.

Adetoun is a sought after musical director, teacher and guest speaker on music affairs with a heart for equipping the next generation of true worshipers.

It is with this zeal and mandate to pay it forward that Adetoun decided to release a
gospel worship medley on 19th February 2017.

Talking about the soon to be released track, she said;

“it’s a song for God’s own people to come and receive at the Throne of Grace,
inspiration and impartation as we all glorify the most high God through it”.